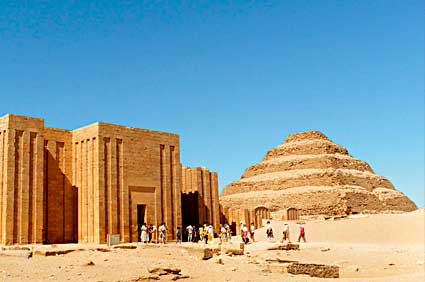 The noblemen (the ranking government officials) and high priests had decidedly more modest tombs. In the Old Kingdom, while pyramids were being built for kings, the noblemen were buried in mastabas. These mastabas were decorated with non-religious scenes depicting the daily life and official duties of the nobleman. ...

The very first pyramid in Egypt was built for King Zoser (Djoser) around 2650 BC. It is known as a Step-Pyramid as it does not have a true pyramid shape but rises to the top in five giant steps (see the people to the left of the pyramid to give you an idea of how large it is). ...

The Pyramids of Egypt

Imhotep, gaining great fame for this wonder, later was declared the patron god of architects and doctors. ...

The Step Pyramid of Djoser in Saqqara is one of the first of the many pyramids that are iconic to ancient Egyptian culture. Djoser's Pyramid...

The Step Pyramid of Djoser was the first pyramid the Egyptians built. ...

The Step Pyramid of Djoser was built about 4,700 years ago with six layers above ground and a series of tunnels below.

A mastaba is a type of Ancient Egyptian tomb in the form of a flat-roofed, rectangular structure with outward sloping sides that marked the burial site of many eminent Egyptians of Egypt's ancient period. Mastabas were constructed out of mud-bricks or stone. ...