Tip: Highlight text to annotate itX
In the age-old battle between man and man-eating sharks, humans have tried several ways to repel the predators — surfboard leashes that emit electronic pulses and chemical shark repellent among them — with varying degrees of success. An Australian company, Shark Attack Mitigation Systems, now claims it has developed a line of anti-shark wetsuits that will repel sharks or camouflage a swimmer, based on scientific studies of sharks' sense of sight. Sharks are believed to be color-blind, and the new wetsuits are designed with that in mind, Shaun Collin, a researcher with the University of Western Australia's Oceans Institute, told Agence France-Presse (AFP).  Shark Attack Mitigation Systems teamed up with the Ocean Institute to create these shark-deterrent designs that can be applied to wetsuits. One wetsuit, dubbed the Diverter, has bold, black-and-white stripes that mimic the striped pattern often seen on poisonous fish and other creatures. "Many animals in biology are repelled by noxious animals — prey that provide a signal that somehow says, 'Don't eat me' — and that has been manifest in a striped pattern," Collin told AFP. The Diverter is also available with striped stickers for the underside of surfboards. Another design, the Elude, takes advantage of sharks' limited vision to camouflage a swimmer in the water. The Elude features a pattern of blue-on-blue waves designed to "hide you in the water column," Craig Anderson, who developed the wetsuits with partner Hamish Jolly, told AFP. "It's based on new breakthrough science, which is all about visionary systems for predatory sharks," Anderson said. "We've been able to interpret that science and convert that into, basically, materials that create some confusion for sharks' visual systems." Though sharks use a number of senses to find prey, some researchers believe the animals rely on vision in the final stages of an attack. Anderson and Jolly tested their wetsuits in the shark-infested waters off Western Australia. In a video of a test, sharks were seen swimming past dummies wearing the striped Diverter pattern, the BBC reports, but when presented with dummies wearing a typical black wetsuit, sharks attacked with gusto. Worldwide, sharks face a number of threats: Overfishing is pushing some shark species toward extinction, and a study from March estimates that annual shark deaths total 100 million or more each year. One advantage of the new wetsuit design, marketed as Shark Attack Mitigation Systems (SAMS), is its nonlethal nature: "It's safe, it's natural and gives the animals no harm at all," Anderson told AFP. Despite the success of early testing, Jolly told AFP that SAMS "cannot say that our suits are a fail-safe protection against shark attacks." The company plans on doing additional testing off the coasts of Australia and South Africa beginning this December, when summer arrives in the Southern Hemisphere. Source: Live Science
Activity
Sort The Diverter wetsuit has bold navy and white stripes like Pilot fish. ... 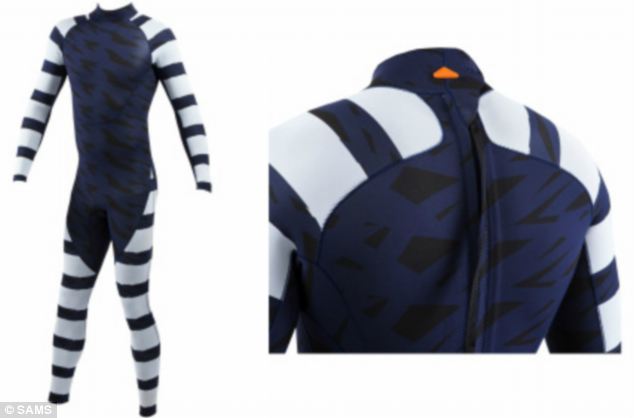 Wetsuits come in a range of designs and patterns which low sharks visibility and confused senses. ... SAMS has developed two main design variations to reduce the chance of attack. ...

How to repel sharks?

Anti-shark wetsuit is designed to protect divers and surfers from sharks. It features a bold striped pattern, which mimics a danger sign in nature. ...

A line of anti-shark wetsuits that will repel sharks. ...

In the age-old battle between man and man-eating sharks, humans have tried several ways to repel the predators. An Australian company now claims it has developed a line of anti-shark wetsuits that will repel sharks.