Gaze into the Body of a Gorgeous Glass Frog

Tip: Highlight text to annotate itX
If you’ve ever wanted to peer inside an animal without harming it, the glass frog offers an amazing opportunity. These tropical frogs have transparent skin on their undersides, making their organs visible. Their backs and the rest of their bodies are usually different shades of green. According to the University of Michigan Museum of Zoology, there are over 100 species. Glass frogs live in the rain forests of Central and South America, and adults live in the trees. Most species are quite small, ranging between one to three inches in length. They tend to be active at night and many have green bones. Scientists aren't sure of their precise diet, but it's thought that glass frogs eat insects, similarly to other tree frogs. New species of glass frogs are regularly being described by researchers. This past summer, scientists identified four new species in Peru. The eggs of many glass frog species are also transparent. They lay their eggs in small clutches, on leaves that overhang water. This way, as the tadpoles hatch, they can slide into the water. Males often guard the eggs, defending them from predatory insects with their hind legs. Like too many creatures that live in the rainforest, glass frogs face habitat loss. The World Conservation Union has added several species to its list of “Vulnerable” animals, including the Cochran frog (Nymphargus cochranae) and the Pacific Giant Glass Frog (Centrolene geckoideum). Source: TreeHugger
Activity
Sort

he major threat is habitat loss and deforestation, as a result of agricultural development (particularly the planting of illegal crops), logging, and human settlement. Other threats include the introduction of alien predatory fish in streams, and pollution resulting from the spraying of illegal crops. ...

Habitat destruction and degradation is a threat to this species, mainly as a result of smallholder farming activities and clear-cutting of forests. Predictions suggest that, in Ecuador, almost half of the habitats suitable for this species have been deforested (Cisneros-Heredia, 2008). ...

An animal species that is likely to become endangered is called Vulnerable. A vulnerable animal species is often at risk due to loss of habitat or declining population. ...

World Conservation Union (IUCN) is the world’s oldest and largest global environmental organisation. They encourage and assist societies throughout the world to conserve the integrity and diversity of nature . ...

The frog has transparent eggs and usually attached to the leaf. ... 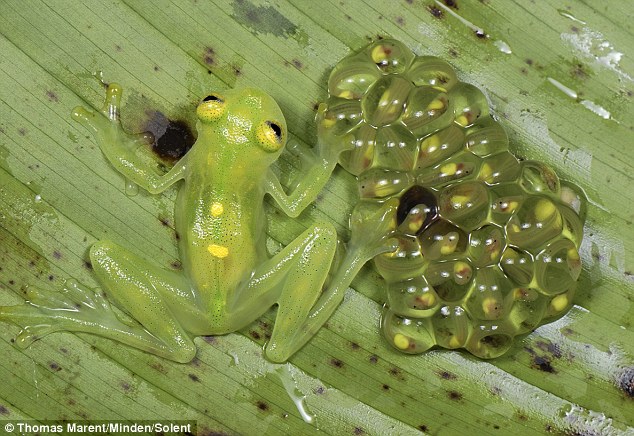 Four new species of "glass frog" were discovered in the Andes of northern Peru. Perhaps you'll spot one of these... https://t.co/fCIfOmVySn

The length of Centrolenidae frogs ranges from 1.2 inches to 3 inches. ... This glass frog lives near rapid streams, both in cleared areas as well as the canopy level of trees. In Costa Rica they are found in lowland and premontane moist and wet forests, premontane rainforests, and sometimes in higher elevations and in lower montane wet forest. They generally live beneath an elevation of 1,600 m. They refrain from drier areas such as in the northwestern lowlands of Guanacaste, high mountains, or coasts. ...

Glass Frog, Costa Rica - information, where to see it, and photos

This amazing glass frog has a transparent skin, allowing you to see their organs. ...

Glass Frogs in the family Centrolenidae are found throughout Central and South America. ...

Glass frog, also called as see-through frog because of its translucent skin. ...

Gaze into the body of a gorgeous glass frog : TreeHugger

Nature blows my mind! These frogs have transparent skin.

Gaze into the Body of a Gorgeous Glass Frog